I’ve been making these boxes for my art show display and decided to photograph all the steps and share them here.  Below are the steps in photos.  For super detailed instructions, download them at this link: Collapsible Berry Box Instructions

I’ve been in a strange state lately. One where I have all sorts of ideas and new projects I want to work on and old projects that I’ve been thinking about for months but haven’t had time to work on.  Yet, when I sit in the studio, I can’t see where to start, or I just find myself just fiddling with and rearranging the supplies around me.  I think this is caused by the sudden expanse of time I find on my hands after the holidays.  The last few months of the year are always jammed with work and a constant push to create enough product for my December shows.  Once those are over and I have time to create some personal art, my creativity stalls.

In an effort to get over this hump, I’m attempting to throw myself back into journaling.  I’m participating in the Art Journal Caravan again this year.  I got a lot of great inspiration out of this workshop last year (although, I wish I’d spent more time with it) and decided to join in again for the final year of the expedition.  So far, I’m having some trouble with the prompts.  Normally, they would be perfectly great journaling prompts and are right up my alley inspiration wise, but, well… see above again about the creative block.  So, while browsing around online, looking at pretty journal pictures on Pinterest, I came across Roben-Marie Smith’s blog and the Documented Life Project again.  I remember checking this out once before but not having time to get into it.  This time, however, the idea really seamed to resonate with me.

If you got though all that, here come the pretty pictures. 🙂 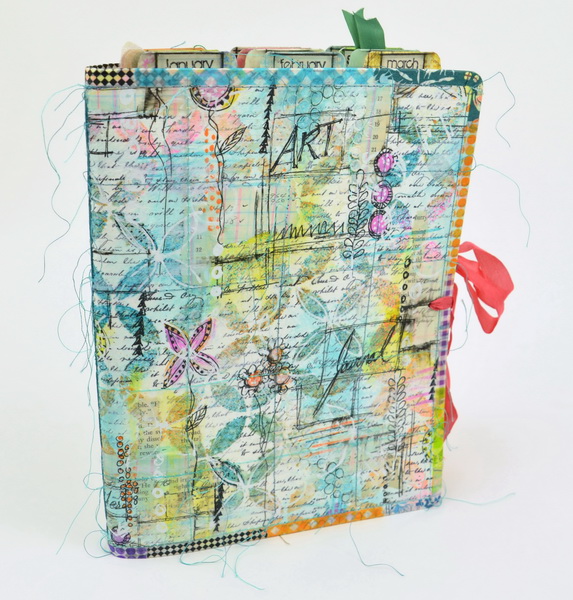 I’ve thrown myself into this project.  I even took the mini workshop Plan.Journal.Play which is a great walk through for altering a planner or a great kick in the pants if you just need to get started. Ahem…

Instead of one of the Moleskine planners, I started with a composition notebook.   And, I couldn’t leave well enough alone, so I ended up taking the whole thing apart and rebinding it. 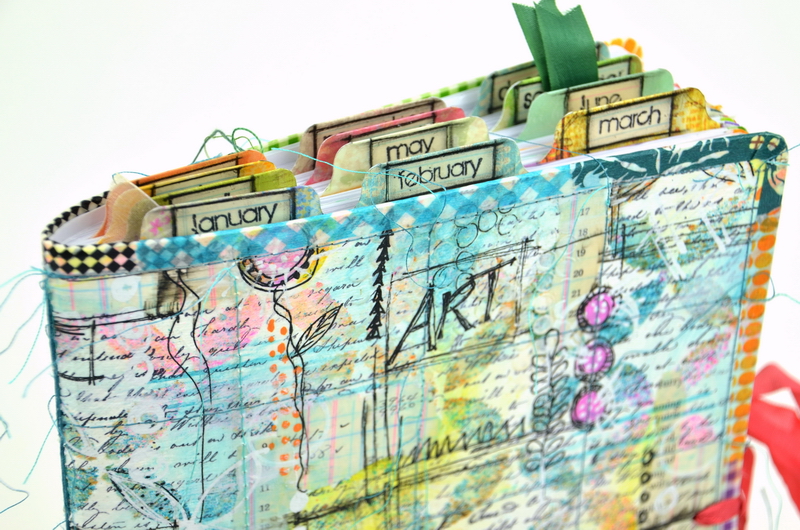 Here’s a quick break down of my process:

I started with this: 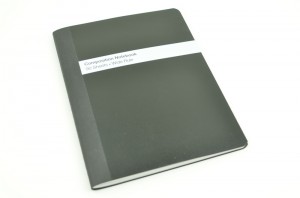 and gessoed the cover.  Oops, the Plastic cover.

I should have tried to sand it first but I was too eager (read: impatient) to get started.  So, I broke out the watercolor paper and cut out a slightly oversized cover piece.

I based coated the watercolor paper with gesso to give it some texture and change how it would take the paint.

I pretty much followed along with the workshop instructions.  That was a big departure for me because I usually just use the workshop for inspiration and then go my own way.  This time, I really enjoyed not having to think about what to do next and just create. 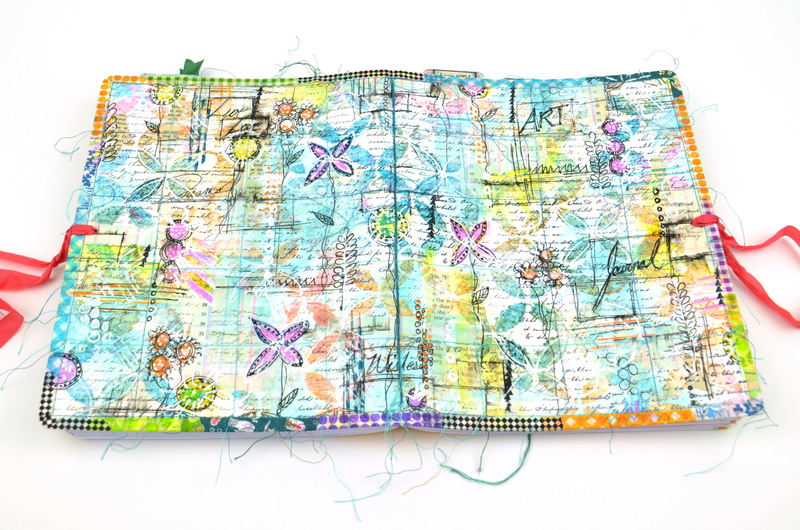 When the cover was done, I layered it with the original plastic cover (for more structure) and another piece of watercolor paper for the inside and stitch them all together.  I have a short list of things to do differently next time and here is my #1:  Do all the stitching before sealing the layers with gel medium!  I actually planned to do a lot more stitching on the cover but after about the hundredth thread break, I just wanted it to be over! Maybe if the gel had a few days to cure but I couldn’t wait for that.  I do love all the thread ends all over but it was seriously a pain in the tookus! 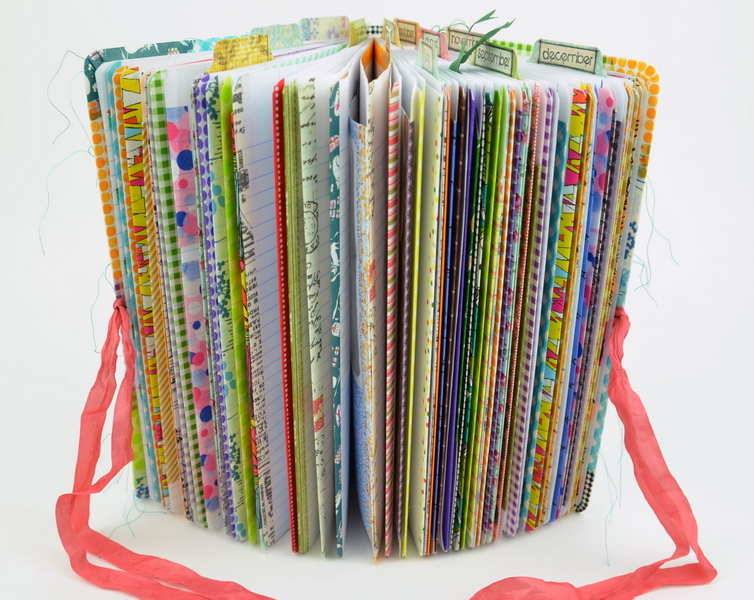 I added watercolor paper and a bunch of other random stuff to the book.  They call those pages ‘tip-ins’ but they are actually more like ‘tape-ons’ because they are added to the outside edge instead of in the spine.  I love all that pretty tape and my scrawny comp book is already a bug juicy journal and I haven’t even added any journaling yet.

Since I was building my own journal, I made space for adding monthly calendars in between all the weekly pages.

I love my new journal and can’t wait to turn it into a giant juicy masterpiece of randomness.  Documented Life!  🙂

My recent journal play has been a little different for me.  Here is a peek at what I’ve been up too.

First, some all digital work.  This is an interesting medium and I’d love to incorporate it into more of my work. 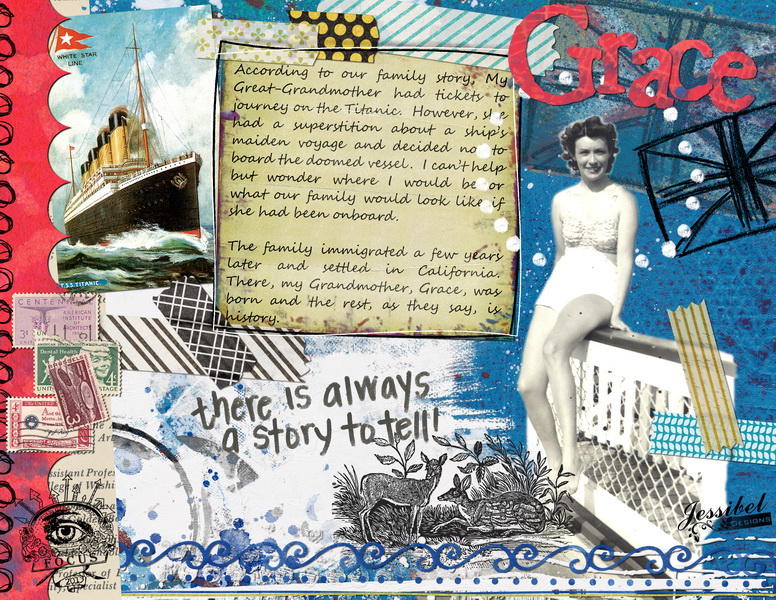 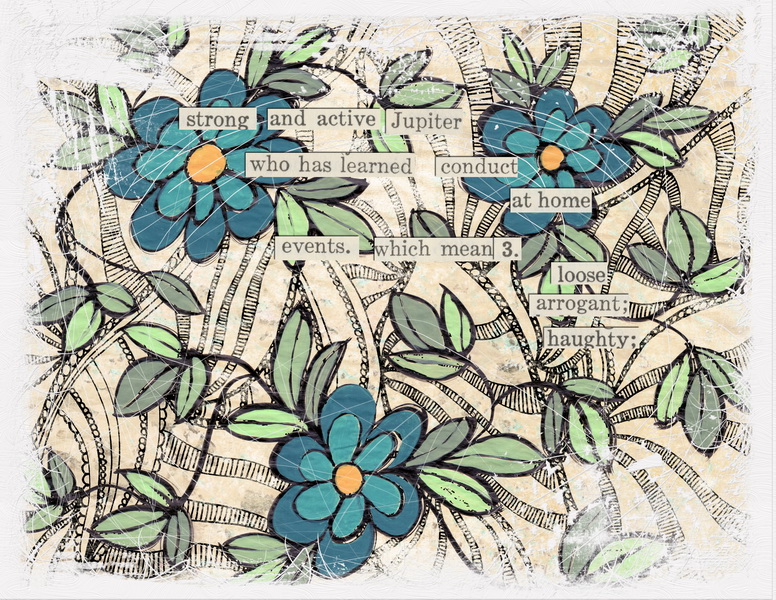 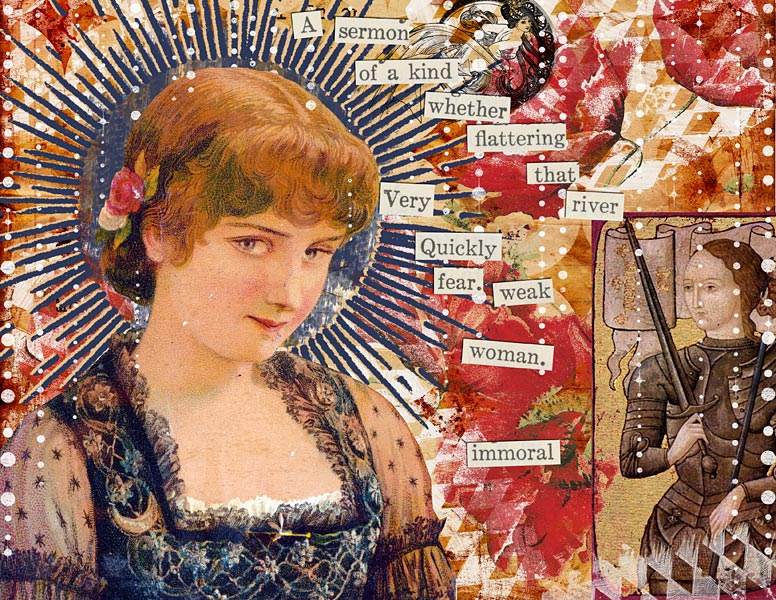 These were all created with the Art Journal Caravan by Tangie Baxter.  If you are interested in getting started with digital journaling, the Caravan is a great place to start.

I couldn’t stay away from my physical journal for too long so I pulled some of the Caravan elements out of the computer and into my studio. 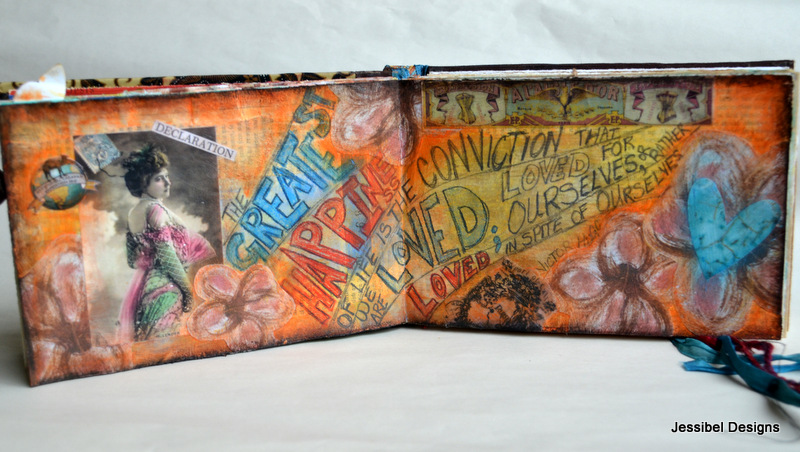 I definitely need to work more on my lettering but this quick and dirty page was a lot of fun to create.

Where my sewing machine gets a workout

The painting and sewing and paper play continues. Strips were cut and sewn back together.  Then they were cut again and more sewing commenced. And many plans were made for more patterns, more color combos, and more fun! Paper and Fabric are Interchangeable

Playing along with the SEWN class, I put together a new book to document my musings. I love the quilty look to this book and I’m eying my neglected quilting books for other pattern ideas.  Maybe a New York Beauty or Lone Star Pattern.  I’ve always wanted to play with those patterns in fabric but never got around to it.  Perhaps paper is the answer. In my studio, paper and fabric are interchangeable. I’ve been away from the blog for a little too long.  To get back into the swing of things, here are a few shots of some new hand painted pattern papers i did this week. 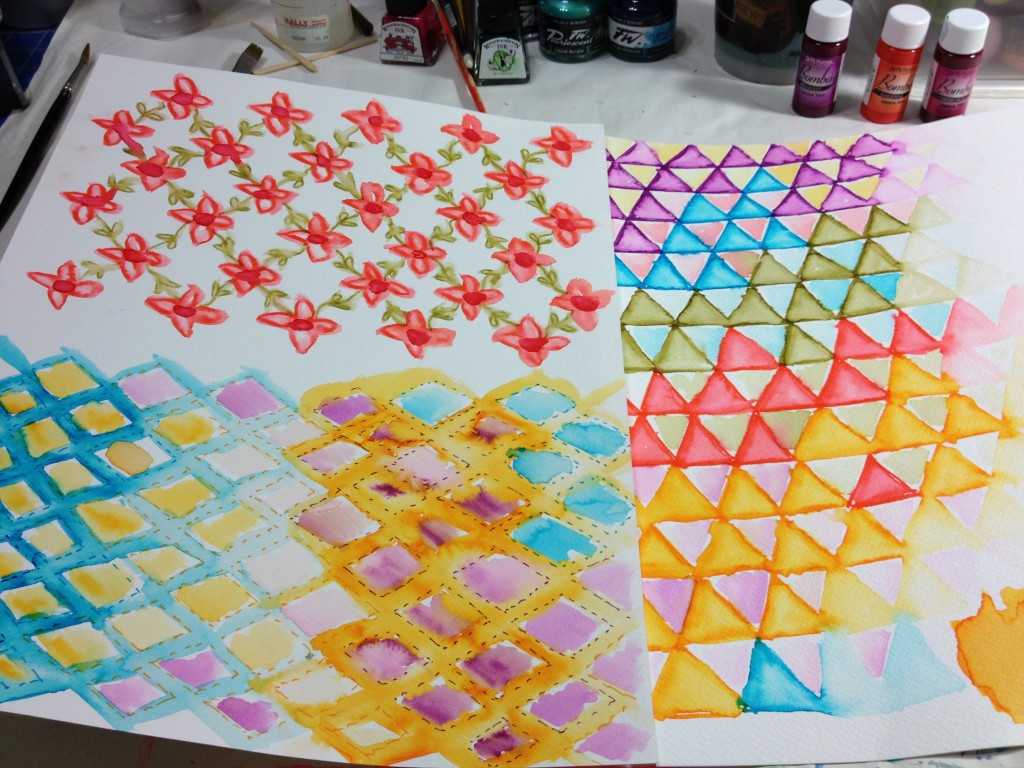 These were created with my new favorite art supply, Tombow Brush Pens.  They are water soluble and gorgeous!  I’m not afraid to admit that I ran out and ordered more colors immediately.  I’m not so patiently waiting for my next Amazon delivery.

Playing with color and shapes, I feel like I’m reintroducing myself to my art supplies.  Pushing myself to get past the blank page and just put down marks.  Oh! Hello acrylic paint, inks and watercolors.  So nice to see you again. 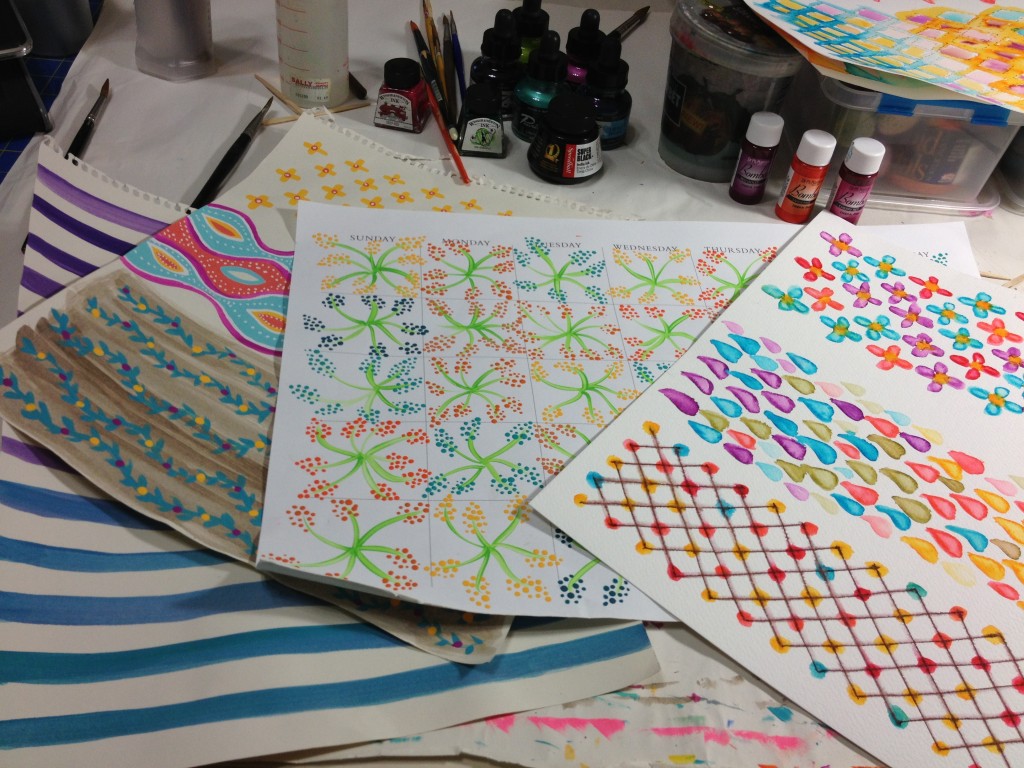 I’m letting Mary Ann Moss’s new class carry me away.  I’ve found her classes to be the best way to re-energize my creativity. 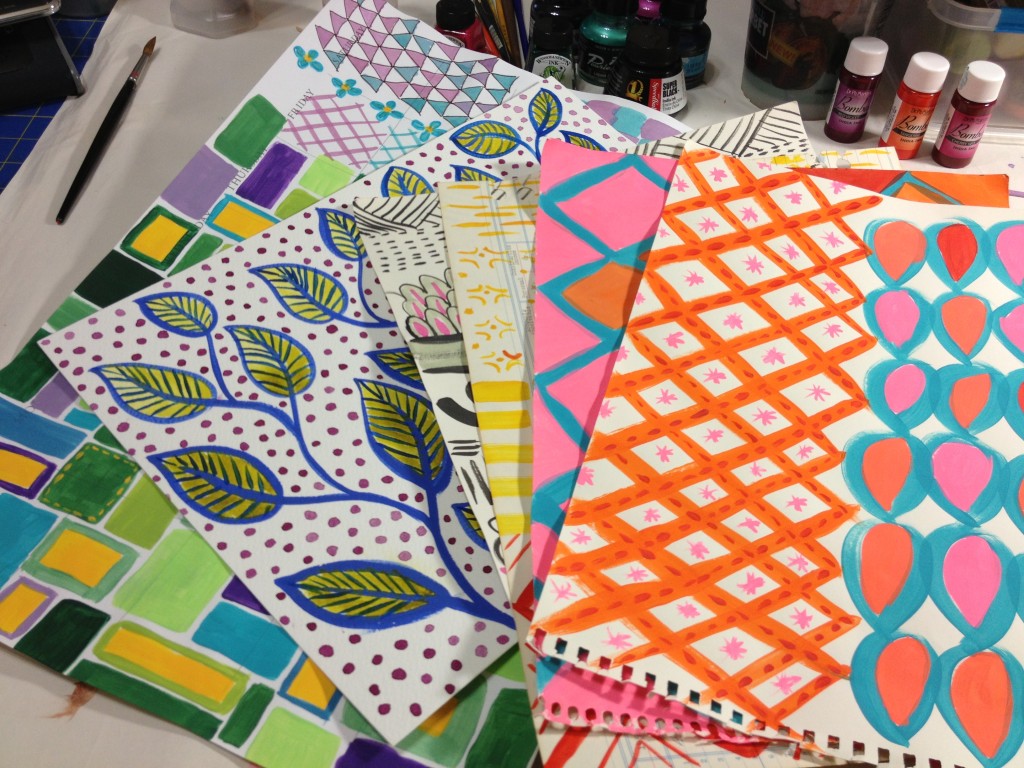 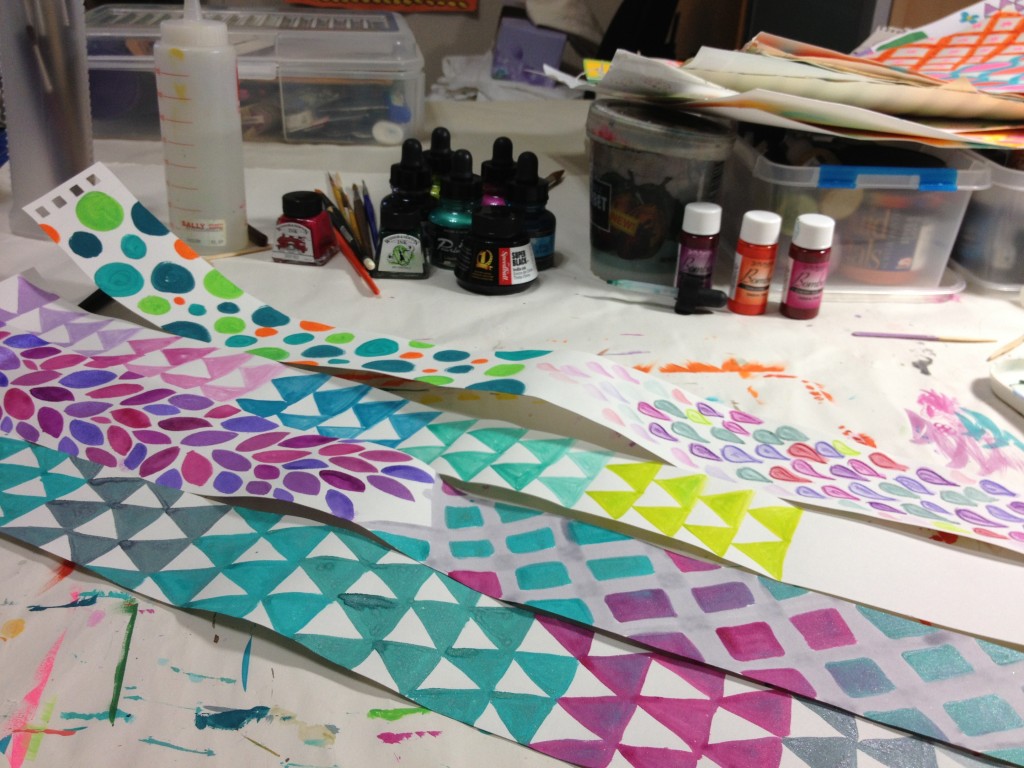 Next step… cutting these up and putting them back together… and a re-commitment to this blog. What happened to 2012.  It is speeding by me with not even a glance in my direction.  Major life events must be that time machine that every Sci-fi author and geek tries to invent in their basement or garage.  Should I tell them the secret? or just keep letting them create marvels of machinery and science?

Somewhere in the time travel, I found myself with brush in hand.  Bright, tropical colors appeared in my journal.

…Well, I had a great post going about the secret of life and time travel but the blog ate my post.  I guess the world is not ready for the secrets to be revealed so instead, here are gratuitous pictures of my journal.